We’ve been doing some work on the condo, but I’m saving that for a later post. Due to this, we spent a lot of time working on that over Labor Day weekend. I even have pictures… for later.

So despite my title, which I could change, but I just don’t feel like it, I’m going to show you pictures of the times we took breaks from our labors, or rested, if you will. (That sentence needed a few more commas, eh?)

Dom loves playing with his daddy. Nathan can get him to giggle. A lot. Saturday morning, we spent a little time relaxing on the porch, enjoying the slightly cooler weather. It was much better than the 100 degree days we’ve finished the summer with. The weekend was overcast and even a smattering of thunderstorms tumbled in.

That afternoon, Nathan was away at a baptism while I was home and Dom was napping. I was finally getting cleaned up and was in the bathroom cutting bangs because I decided that I wanted them again when Nathan came home and had a concerned look on his face. I, of course, whispered (Dom’s sleeping, remember): “What?!”

“Aaron and Ada are getting married!”

I was a little confused because, I had already replied to the Facebook invitation for the “After Party” so I figured they were getting married FIRST in order to party afterwards. What I didn’t know, though, was that their marriage was taking place in Salt Lake (they currently live in Seattle). Aaron and Nathan had been roommates for several years before he became my roommate. Ada had then become a roommate as well when she started dating Aaron. So once I learned the wedding was here, I understood why he was so concerned about missing it.

Turns out, our invitation to the wedding part was lost in the mail. Boo postal service.

Nathan rushed back out the door to at least show up for the pictures/food afterward and congratulate them. I waited for Dominic to finish his nap then we joined them at Jordan Park. They had a pavilion there and had put down white construction-paper tablecloths. I found their bucket of crayons and grabbed a handful. Nathan sat with Dom and tried to teach him to doodle. (What a funny word: doodle.) Mostly, Dom just attempted to eat the crayons, but he scratched out a few colors. 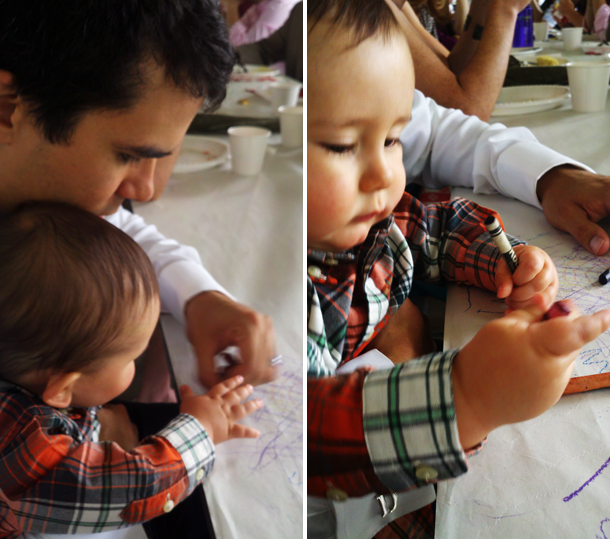 On Monday, we were able to meet up with the now married Aaron and Ada for lunch at Gourmandie’s. It was nice to get them to ourselves and just sit down and talk. That’s not really doable with everyone around celebrating their wedding and all. Dom enjoyed himself a breadstick. 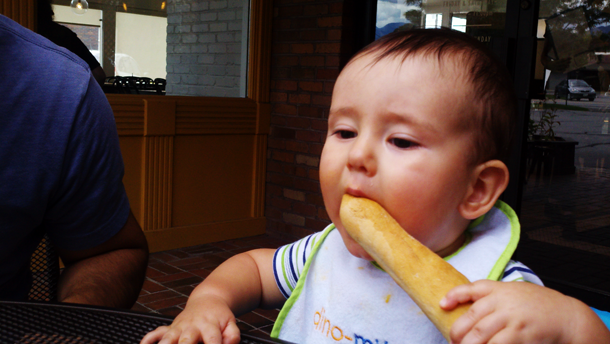 Did you labor or play for Labor Day weekend?

Dress like it, too! Artwork designed by me, of course. :)

The Latest from Chef Guapo

The Best of the Sciolist