Nathan blessed Dominic in church today and little man was very reverent. This time, I remembered to take pictures (unlike Christmas, but I suppose I blame that on being really sleepy after a very rough night). Mom and Dad Elkins are up here for the week for the holidays and to spend time with their new grandson. We love having plenty of family time and have been lucky enough to get that on both sides of our family this holiday. I am sure that I take for granted how fabulous my family and in-laws are. I am one lucky girl, but mostly I feel happy that Dominic will grow up with such amazing aunts, uncles, cousins and grandparents. Hopefully we trick him into thinking that his parents are pretty amazing, too. 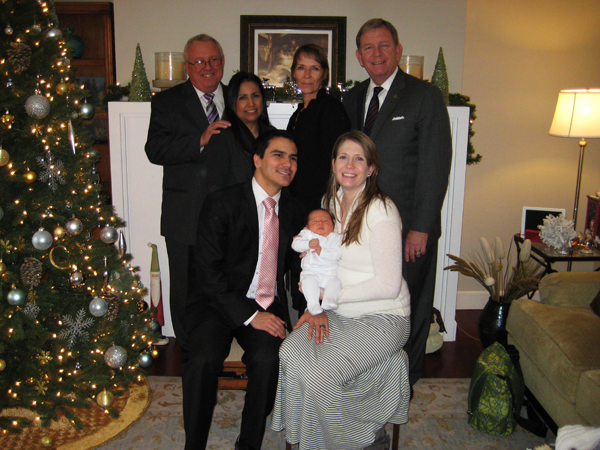 A few thoughts on the day for my future reference:

I was worried this morning that I wouldn’t be able to “schedule” things correctly. Dominic nursed at 9:30 so that would mean he’d be hungry around 12:30 and the meeting started at 12:50. It’s funny, I suppose, the things that you worry about as a first-time mom. Maren came over a little after 11:00 so that I could jump in the shower while Dom took a nap, then he woke up around noon just as Mom and Dad Elkins arrived with Aunt Janeen. I nursed him while Mom helped get things together for me and then get Dom dressed in his little white outfit after he finished. By the time we got to church, he was a content little boy, which was superb because he’s been quite fussy this last week regardless of how well fed he is or diapers changed or well slept.

I was a little sad that some of my family wasn’t able to be there (because of sickness and being out of town), but the small circle of priesthood holders that stood next to Nathan were plenty and men that we love. Not every little boy gets to have both of his grandpa’s holding him for his blessing so that made me happy. After his blessing, Laura came up and sat next to me on the bench and held him, wrapped tightly, sleeping. Like I said, Dominic is blessed to come to an amazing family and because of a recent phone conversation, having my cousin Laura come and sit next to me for part of the meeting was quite appreciated.

After the blessing, for the sacrament meeting, we had several youth speakers and a “missionary farewell”, but they finished quite early so Brian, the first counselor, asked me to share my testimony. As I walked up to the podium, I was pretty nervous. I definitely rambled while I stood up there, but hopefully I shared a little bit of what I was thinking about this Christmas with becoming a mother. I’ve been thinking a lot about Mary. I have such a new perspective of her now. We often focus so much on the baby Jesus at Christmas, which, of course, is the right thing to do as He is the Savior. But, I know now, really, so much more about the incredible role that Mary played and how difficult her calling was. Raising a child–raising your first child– is not easy. At least, it’s not for me. It hurts. It’s exhausting. It’s emotional. I am so thankful that I don’t do this alone. And now, I have so much more awe for Mary and her sacrifice to bear the Savior and raise him in righteousness–with Joseph’s help.

After the meeting, Mick and Tracy hosted for food. Great Grumma Campbell gave the opening prayer and we are all very happy to have her there after time spent in the hospital just after Thanksgiving this year. Really, it’s been a bit of a tough Thanksgiving-Christmas for family members with hospital trips, car accidents and a beloved aunt with a cancer diagnosis. It reminds me that we live in a very imperfect world and sometimes I wonder why we said yes to how difficult this would be. But then I can remember all of the positives that we have in this life as well. As difficult as it has been to be pregnant, bear a child, figure out how to nurse, rarely sleep, cry and feel frustrated or worried, it really is amazing just to look at Dominic and think, “wow, he’s mine.” I know that I’m the mom, but I think he’s mighty handsome. If we didn’t have the darkness, we wouldn’t realize how bright it is when in the light.

This site uses Akismet to reduce spam. Learn how your comment data is processed.

Dress like it, too! Artwork designed by me, of course. :)

The Latest from Chef Guapo

The Best of the Sciolist